We love having thought provoking conversations with our friends and community members. We always strive to provide a safe space where we can all learn and grow from each other. Everyone’s journey is completely unique, special, and worth sharing.

Today, we’d like to introduce you to our friend, queen, and fabulous wig stylist: Perfidia. We chatted all things hair, Pride, and got to take a trip down memory lane (think '80s vintage salon magazines, Broadway, and her self-proclaimed golden years: the '60s). So, without further ado… 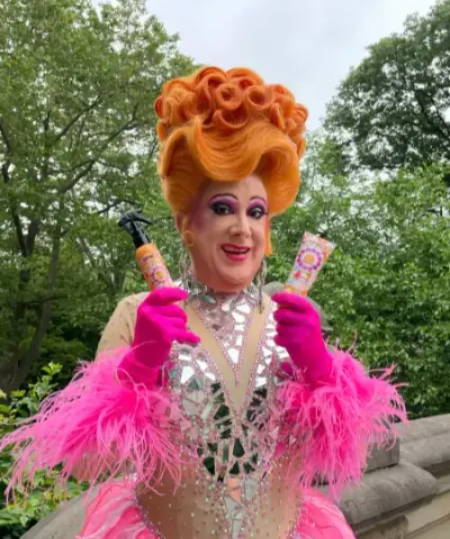 We heard you’re a fabulous wig stylist! What do wigs mean to you and how did you get your start in wig styling?

"I use wigs as hair fantasies and for creating dreams. Wigs give you the opportunity to show off parts of your personality that you may not be able to achieve with your own hair. The 1968 documentary, The Queen had a big influence on the way I style wigs. In the '80s, I also started collecting vintage beauty salon magazines from flea markets. 1965-72, those are the golden years, 67-69 are my favorite, specifically.

I was lucky to be mentored by some incredible stylists. Danilo, who was doing all the Mugler runway shows, and Bobby Miller, who did wigs for Lady Bunny. But mostly it was Matthew Katzen from Boy Bar, who had run a beauty salon and styled all the girls at Boy Bar. The Pyramid Club was already established as a spot for avant-garde drag, when Boy Bar came along. The Pyramid girls were certainly a big inspiration, but at Boy Bar we veered a little more '60s camp and glam.

I also worked at the Patricia Field store for 13 years, where I began in the makeup department, then I started a wig department, which evolved into my own salon within the store. Back then, there was no other store like it! Those '60s styles we were doing at Boy Bar crossed over into the store, and then you started seeing people like Deee-Lite and RuPaul wearing them too. After Patricia Field, I went and worked on Broadway. I had great mentors there too, and Broadway taught me to shut up and listen. I don't have to be the star; when my wigs are on stage, there's a piece of me there, too.

These days I do more Marilyn type styles than retro updos and barrel curls and french twists. With the right wig, you can really create a fully realized character. Not to mention-- wigs are just fun! That's what drew me to wig styling in the first place."

What does Pride mean to you?

"To enjoy the community and learn not to judge each other, share love and support, and remember our elders' contributions. Around this time of year, I always think of Flawless Sabrina, International Chrysis, and Tish, who were all mentors and inspirations when I was getting started in drag. Sabrina was really invested in fostering community, and I've tried to take a page from her book when it comes to helping and inspiring up and coming performers."

How are you celebrating Pride?

"I usually go to Cowgirl Hall of Fame on Hudson, then The Monster on Christopher to see Lady Bunny. I've been doing that for the past 10 years maybe. Back in the Boy Bar days in the '80s-'90s, we'd do a float with all the Boy Bar Beauties. Every year was a different theme: planets in the solar system, or famous women throughout history, things like that. The float would go from 125th down 5th avenue to Christopher St, and then turn on Hudson. That was so amazing! Now I'm more low key, I like to just hang out in the Village."

Do you see your hair as part of your identity?

"I have styled for thousands of gender nonconforming and drag personas and gay friendly friends and family for many years, I consider myself part of the Wigstock Generation. Wigs have the power to uplift people! I noticed this transformative power when I was styling for the Boy Bar queens, all of a sudden we had fully fledged nightclub personas! We all had our trademarks, and people recognized us. It was magical. Wigs take you away from the mundane, that's what I love about them."

What are your favorite amika products?

"The supernova moisture and shine cream is just lovely. I dilute it with just a little bit of water in my palms before I apply it. It goes on smooth, soft, and allows my curls to bounce back a little bit, it's not too heavy. And I'm very picky about my creams!"

We love hearing from our amika fam and friends. If you want to be part of the conversation, don’t be afraid to reach out! I love supernova! And so do all my clients!!! Are you guys thinking of discontinuing it? My supplier never has it! :(

$50.00 away from free shipping!
start earning loyalty points SIGN IN
Your cart is empty
Continue Shopping

BY SIGNING UP YOU AGREE TO RECEIVE MARKETING COMMUNICATIONS FROM AMIKA. YOU CAN UNSUBSCRIBE AT ANY TIME. GIVEAWAY CLOSES 11:59 PM EDT ON 10/28/22. 10 WINNERS WILL BE SELECTED AT RANDOM ON 10/31/22 AND NOTIFIED BY EMAIL. COUPON CODE WILL BE SENT TO EMAIL IMMEDIATELY UPON ENTRY AND CANNOT BE COMBINED WITH ANY OTHER OFFERS.