amika was born and raised in Brooklyn (specifically Bushwick), a hub of creative thinkers, artists, and entrepreneurs. This borough is where we pull a lot of our inspiration from, because it’s the place we call home. Brooklyn has no shortage of new and unique ideas when it comes to just about anything, but especially businesses. In our “Brooklyn businesses we love series”, we’ll be passing the mic to small-business owners thriving and living out their dreams. Here they’ll talk about their come up, lightbulb moments, successes, failures, lessons learned, and advice.

Today we’re speaking to the owner of CMarty's Jerk, Jamaican jerk cuisine made by Christopher Martin. 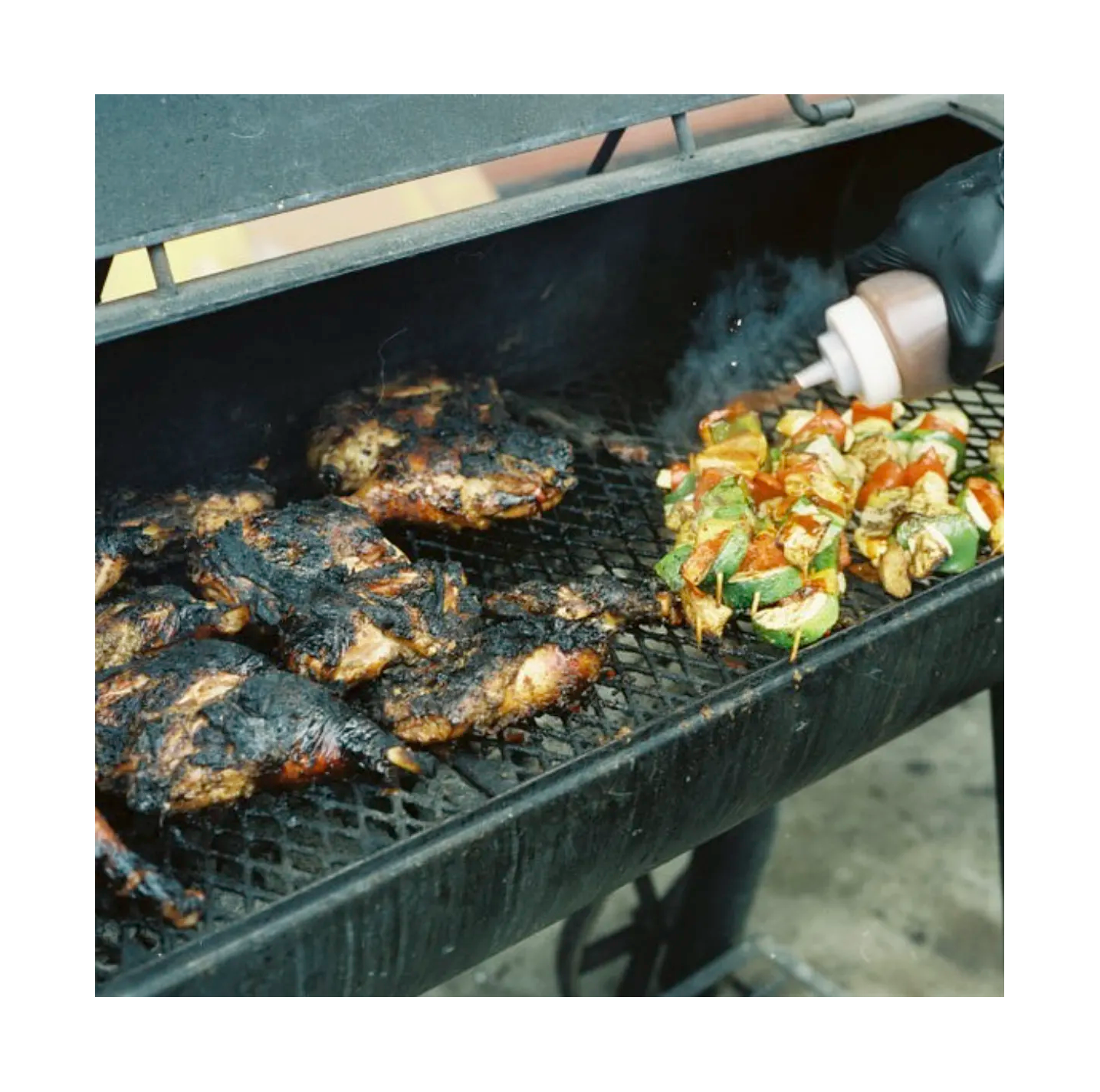 introduce yourself and tell us about how you made your way to Brooklyn.

"My name is Christopher Martin and I am the owner/head chef of Cmarty’s Jerk. I am originally from Freeport, Long Island, and have been living in Brooklyn now for the past 7 years. I initially came here for work as an Architectural/ Engineering consultant to pursue a career in Civil Engineering.

When I first got here, I lived in Greenpoint for 4 years, then moved to Bedstuy for a few months, and finally found my spot in Crown Heights. When I was living in Greenpoint I had already developed my family Jerk seasoning recipe and started hosting pop ups here in NYC. But after being completely immersed in my Caribbean culture here in Crown Heights, I was inspired to take Cmarty’s Jerk to a new level. I quickly started hosting more & more pop ups and developed new seasonings like my Peppa Sauce (Hot Sauce) and Jerk Powder rub.

what was the process like of bringing the idea for Cmarty's Jerk to life?

"The businesses name is a long one. Back in high school, my friends called me “CMARTY Mar” because my name is 'Chris Martin', and as kids, we used to watch MARTIN on UPN 9. They used to call him 'Marty Mar'.. So because I was funny like Martin and used to dress like Martin, and my last name was Martin, C Marty became my name. Later on, I started a clothing brand called 'Cmartymar' and slowly but surely my name was no longer Chris, I became 'Cmarty' to everyone. With the food businesses now, most Caribbean places just have the person's name and then the word 'Jerk' after it if they sold Jamaican food. Like Tropical Jerk, Island Jerk, or Sunny’s Jerk and so on and so on. So as a way to parody that, I figured Cmarty’s Jerk would be funny and be my version of what I grew up seeing at the different West Indian restaurants.

The way the idea first started for the business was I had a clothing brand initially called Cmartymar, and I was taking a brand building class to take my brand to another next level. In the class we had projects and one of our assignments was we needed to create a halo product. The halo product was something that was related to your brand identity but could not be clothing related. My brand identity was all inspired by my heritage and culture, so I decided to make a Jerk Seasoning. Then, we had to create a pop up event for our brands, so I threw a BBQ and used the jerk seasoning I made and just like, that Cmarty’s Jerk was born.

have you had an “I’ve made it!” moment yet? If not, what will make you feel like you’ve made it?

"Nope, hahaha. Everyone seems to say that, but I don't think so. Maybe it's because I consider myself an artist and I'm sensitive about my stuff. In ways I have made it, but there is so much more to be done.

What would make me feel like I made it is when I have my dream farm out in the Caribbean that produces all my ingredients for my seasonings and restaurants. And I can see my jars in grocery stores all across the US, UK, and the Caribbean.

The moment I go to Compare Foods, Whole Foods, Wegmans or wherever, and see someone's grandma put my seasoning in their cart and walk away (hahaha), I'll feel like I've made it. " 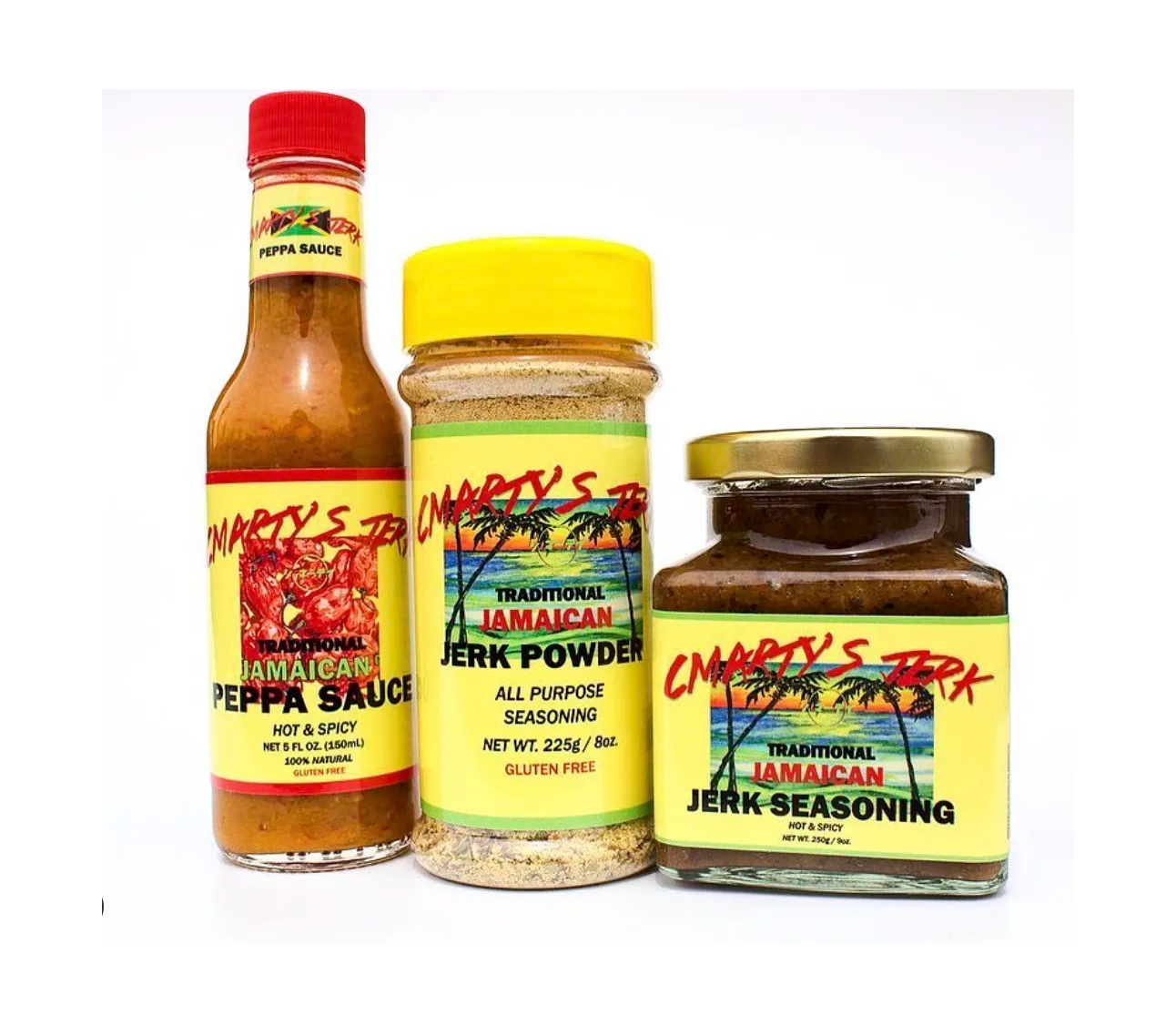 tell us about a moment when you wanted to give up or felt you failed but pushed forward and persevered.

"Those moments happen all the time. I wanted to give up last Thursday lol. Sometimes it will rain or you're stuck out in the snow in front of a grill that is barely hot and not cooking your food in 5 degree weather. Or people are hungry and you're scrambling to get things done and there is a huge line of customers forming. Or you make a huge pan of food and accidentally drop it on the floor and waste all that precious time and energy. Or it’s the end of the night and you have a MOUNTAIN of dishes to do. Or you have no gigs, so you're eating jerk chicken for 2 weeks by yourself to not waste what you have and save money. Or you make a mistake on your website and people buy a bunch of stuff that you don't have and now you have to go crazy to fulfill your orders and still stay on schedule for all the other things you initially planned to do.

Giving up is easy. Our human nature always wants to give into what is easy. Every day you have to persevere and push forward. Luckily for me it is fun, and I love what I do a lot."

"A lesson that I will never forget is, if you really want something you can have it. It sounds cliche AF, but it’s true! Have you ever seen that P Diddy video when he smashes the phone after he gets into the VMAS and starts screaming “....anything I want I can get !” The shit is true, son. This business was just something fun. I like to make my friends chicken (lol). But now, it's paying my rent and affording me new cool sneakers and taking me on trips to Hawaii. Dream come true. It's wild."

how has the pandemic affected your business?

"In the beginning, it was really tough. I had to completely re-adjust my business model and create something new in order for me to continue to make money and do what I love. I had to change my menu completely and create things that were more portable and also easier for me to prepare during service. I no longer could host major parties and had to find somewhere to set up shop & serve. But, these moments are where the most growth happens.

In the end it actually was what took Cmarty’s Jerk to a new level. I created my famous Banh Mi Sandwich and Jerk Nachos that people love. The pandemic caused bars to have no choice to serve food with every drink order. So, I took advantage of that and started doing pop ups all over Brooklyn until I eventually got my residency at King Tai Bar."

where does your inspiration come from?

"My inspiration comes from all over, but the most direct honest answer is from my inner joy. Whenever I'm doing exactly what I want and I'm having the most fun or have a really clean, sharp positive outlook on life, BOOM, I get an idea.

As a creative or an entrepreneur, I think it's imperative to surround yourself with things that you enjoy and people that you love and challenge you. Inspiration is such a fickle, funny thing that has to be nurtured. It happens I believe when you layer life with happiness and have enough appreciation on your journey to notice it. You can't force it. As I'm talking about this it's making me look inward and kind of laugh about the whole thing, but inspiration is like a romantic relationship. You can't force something to happen. It has to naturally build and express itself from an honest place in order for anything really to manifest."

what’s one of the most challenging aspects about being a small business owner?

"Self-motivation has got to be the hardest thing. It's your responsibility to make things happen. If I don't do it, it won't happen. So as a result, you have to organize yourself and teach yourself to do the things you want to do. It is so easy to stay in bed, watch every YouTube video on earth, and finish Netflix. But, those things don't bear fruit and seldomly ever produce results for you.

Getting up, getting inspired, making the work fun, and finding joy in all the difficult things is the hardest part. But when you get there, it's pretty fun and things come naturally. I noticed that the more you challenge and push yourself, the more things kinda magnetize toward you.

The universe is a real thing."

do you have any words of advice for aspiring entrepreneurs?

"Don't stop. Just don't give up. It's crazy for me to even say this because it feels like I'm talking to myself in the mirror. Just don't stop and do the things that you need to do even if they're late, you're tired, you procrastinated, and you're nervous. All of my growth has been from moments of perseverance through fatigue, self-consciousness, and fear. Consistency seems to be the real true secret to success." @amika
your shopping bag (0)
$50.00 away from free shipping!
start earning loyalty points SIGN IN
Your cart is empty
Continue Shopping

BY SIGNING UP YOU AGREE TO RECEIVE MARKETING COMMUNICATIONS FROM AMIKA. YOU CAN UNSUBSCRIBE AT ANY TIME. GIVEAWAY CLOSES 11:59 PM EDT ON 10/28/22. 10 WINNERS WILL BE SELECTED AT RANDOM ON 10/31/22 AND NOTIFIED BY EMAIL. COUPON CODE WILL BE SENT TO EMAIL IMMEDIATELY UPON ENTRY AND CANNOT BE COMBINED WITH ANY OTHER OFFERS.